Once upon a time there was an advertising copywriter called Indra Sinha.

Now, Indra was not your ordinary copywriter, for he wrote very, very, very long copy ads that won many, many awards.

I can’t be arsed to get my D&ADs out, but I know off-hand that he won the Copy Pencil in 1986 for the Imperial War Museum (I just love the headline, ‘Somewhere in this picture, 2nd Lieutenant Eric Heaton lies dying’) and 1989, for the Metropolitan Police: 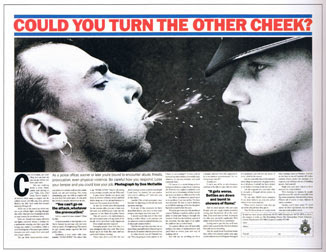 I think he was also nominated a couple of times in 1998 for Amnesty International and some other ads in other years.

In 1993, he created the Bhopal appeal to help Bangladeshi people who have been affected (that word is a deliberate understatement) by the Union Carbide disaster. It has helped tens of thousands of people and continues to do so. Good for him.

And he was nominated for the Booker Prize a couple of years ago for Animal’s People. It didn’t sell many copies, but who gives a fuck? In case you didn’t know, every decent copywriter secretly or openly wants to win the Booker Prize (the Pulitzer and Nobel are a bit remote to fantasise about), so being nominated is an incredible achievement. (If you’re an art director, imagine some important picture people like a picture you made.)

So, quite a career.

You might also like to know that he doesn’t have many of his own ads on his website because he burnt his portfolio when he left the industry.

I can’t help admiring the guy.

And apologising for what I’ve corrected on this post. Sorry, Indra.