It’s Not Gas I Smell. 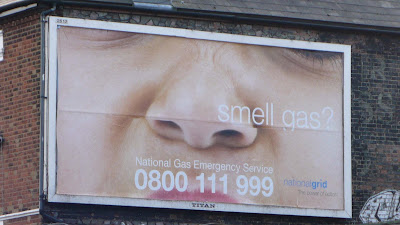 Here’s what’s odd about this campaign:

1. It’s a campaign. The other executions are identical but for the different scrunched-up noses they feature. I wonder why they did that. Was it because elderly white women would identify with this one, but if they saw the one with the black man’s nose they’d be totally confused and would not know how to perceive the scent of something by means of the olfactory nerves?

2. The use of a picture at all. I assume most of you know that shoots are a bit of an undertaking: cast the right people, light them right, get them to scrunch their noses up right, choose from the alternatives, show them to the CD and client, change all of the above based on the client’s opinion, mac the ad up etc etc… And all because we might not understand what you mean by smell gas? Hmmm…now how do I smell gas? Ah! With my nose! Of course!

3. The bumph is virtually illegible. Why white writing on a whitish background?

4. You only need that emergency number when you’re at home or work: the very places that 48-sheet posters do not exist. Of course, you could write the number down on the off-chance you’re going to smell gas later, but I somehow doubt many people are going to do this.

Why not ‘SMELL GAS?’ and the phone number, maybe with a National Grid logo at the bottom just so you know it’s not a prank. Or perhaps a leaflet through the door that features a pull-off magnetised number so you can stick it on the fridge? Would that have been so hard?