For the last few weeks I’ve been intrigued by an ad campaign of which this is the most inexplicable execution: 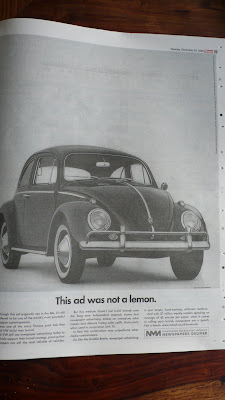 ‘Although this ad originally ran in the 60s, it’s still considered to be one of the world’s most successful newspaper advertisements.’

‘This ad’ is of course a bastardised version of the VW ‘Lemon’ ad that ran in America in 1959. However, this reference might just go over (or around) the heads of the readers of the publication in which it appeared: The Sun. Now, as a self-confessed Sun reader of over 20 years standing, I wouldn’t say that my fellow readers are a bunch of ignorant, knuckle-dragging mouth-breathers, but to expect them to be aware of a foreign newspaper ad from 50 years ago is optimistic in the extreme.

Beyond that, quite why they’d give a shit about this ad campaign completely baffles me. You’d have to be someone who worked in advertising or marketing both to understand the reference and then to care enough about the ad to change your media schedule (and have a media schedule to change). I think this ad is aimed at maybe 1000 people, tops, many of whom will not be Sun Readers. And this is from an organisation that wants to tell me how to improve my ad spend. What next? A suggestion to run that commercial for the local curry house in the centre break of Corrie?

And it makes no sense. It actually says that the Lemon ad is 50 years old, which basically means that there have been very few newspaper ads since then that better illustrate the wonderful magic of newspaper advertising. That means the intervening 20000 days have been somewhat disappointing, but do read on.

‘It was one of many famous print ads that helped VW build their brand.
‘And VW still use newspaper advertising today to effectively support their brand strategy, proving that newspapers are still the most reliable of vehicles.

Call me sceptical, but isn’t that like saying that a pop-gun causes a lot of damage, particularly when used in conjunction with a nuclear warhead? (And, by the way, that sentence should have a comma between ‘uplift’ and ‘particularly’, not a full stop.)

‘Way outperforms’? Jesus Christ. What about ‘substantially outperforms’? And it’s another fact-free conclusion that’s as weak as a paraplegic gnat. I imagine national newspaper and TV advertising does ‘way outperform’ other media combinations, for example: facial tattooing and the classified section of The Morning Star, or prostitute cards and six-sheets in John O’Groats. However, if you want us to be impressed you’ll have to specify what those combinations are.

‘So, like the lovable Beetle, newspaper advertising is your simple, hard-working, utilitarian medium.’

Should we add ‘unspectacular’, ‘outdated’ and ‘used by sentimental people who prefer it in the face of far more efficient alternatives’?

‘And with 37 million weekly readers spending an average of 40 minutes per paper, when it comes to selling your brand, newspapers are a peach. Not a lemon. www.nmauk.co.uk/iconicads’

Again, I think a comma would be better than a full stop between ‘peach’ and ‘not’, but who cares? There can’t possibly be anyone who’s still reading at this point (except me), so that beautiful fruit-based play on words is unfortunately going to go to waste. Never mind. Save it for the novel.

If that’s the case, I’m absolutely delighted. However, the above seems to demonstrate that newspapers can also be an inappropriate medium that shoots itself in the foot. I assume that some plan was concocted whereby newspapers would promote themselves with free space given to this campaign (other ads reference Honda ‘Banana’, Haagen Dazs ‘Lose Control’, and Heinz ‘Tomato Slices’) but don’t they realise how dumb this looks? The entire conceit of using ‘famous’ ads of yesteryear seems to be a desperate lunge that says ‘there used to be a point to newspaper advertising but there isn’t anymore, otherwise we’d have dozens of successful ads from the last year to refer to. As it is, we’re losing massive share to online so we’ve written (very badly) these fact-free slices of misguided rubbish in the hope that they’ll convince one in a thousand of you to care. Fingers crossed.’

If they’d like a humble alternative suggestion, they might do better to build a persuasive case for newspaper advertising and take every single one of their target market for a nice lunch where they can gently and charmingly get their point across in a way that won’t be ignored.

Or they can take out some DPSs in the Daily Sport that just say ‘newspaper ads are great (honest)’ in 72pt futura bold condensed.