When I was at Watford, we learned that in creating advertising, the single most important thing was to have an ‘idea’.

An ad could be cut down in seconds with the phrase, ‘Yeah, but what’s the idea?’

For the three of you who don’t know, an ‘idea’ is the conceptual framework an ad campaign is based on, eg: ‘Mobile phones that go off in cinemas ruin movies, so let’s show how an Orange mobile phone can ruin movies in other ways’. Or ‘Guinness takes a long time to pour, but good things come to those who wait.’ They could even be as simplistic as ‘The Economist makes you rich and successful.’ The ads are then written as reflections of this ‘idea’.

But what about ads where it is simply a piece of copy that is beautifully art directed?

The ads can still be brilliant, but are they able to fit within the ‘idea’ framework that is so revered?

(I got bored looking for a big Barnardos ad. If anyone’s got one, send it over and I’ll stick it up.) 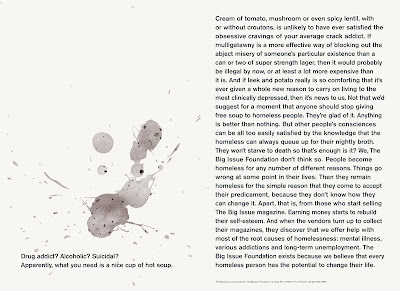 And if not, do ‘ideas’ matter?

Well, in the two press ads there are ‘ideas’ at work. They may not be the easy-to-reduce-to-a-sentence conceptual overviews of other campaigns, but they have ideas about tonality and expression that run through the work like a stick of rock. They don’t explicitly say ‘Barnardos won’t give up on troublesome kids’ or ‘The Big Issue provides an answer to the awful reality of life on the streets’ (those are more descriptions of the charities than their advertising campaigns), but they do say it implicitly.

The fact is, with ads like this, the reader has to engage a little further to get the message out, but by then they’ll have a deeper relationship with what you’re trying to say.

And the ideas do have size and scale. Barnardos followed the above with this campaign:

And the year after the above Big Issue campaign happened, they made a TV ad which won a D&AD pencil.

In the end, great campaigns can have explicit ideas or do without them. It’s just that nobody really thought to mention that when I was at college and it’s rarely mentioned now.