I don’t see the point of this poster: 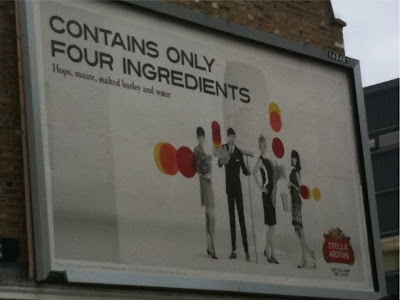 1. Who gives a fuck if Stella Is made from four ingredients? I’ve spent most of my life having no clue what goes into beer and it hasn’t bothered me one bit. If I was told Stella also contained peat or woodpecker turds, I’d cope. And what about the others that don’t make this boast? Kronenbourg is lovely, as are Grolsch, Hoegaarden, Corona, Cobra etc…

2. Talking of others, this is exactly the fact that Becks based their advertising on for years. Did anyone care then?

3. What about the target market? I can see how they might have enjoyed those Jean De Florette-type ads (at a push), but why they’d care about this fact, I have no idea. They call it Wifebeater. If you call something Wifebeater, you may not be that precious about what goes into it.

4. The art direction makes it a real arse to read and take in. It’s a bit of a mess and looks like the kind of thing that might appeal to people who drink mineral water or Pinot Grigio. 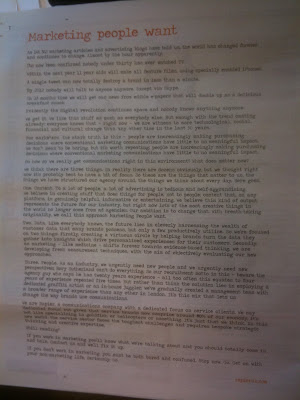 I don’t know if it’s big enough to read, but this is a full-page ad that appeared in Tuesday’s Evening Standard. It was placed by a company called Rapier and has the perplexing headline ‘marketing people want’, which never seems to make much sense, then it dribbles on VERY indulgently for about 1000 words that feel more like a million.

Dear reader, I tried to get through all of it just so I could convey its brilliance (or lack thereof) accurately, but I got so darn bored after about a third that I simply could not do it. It just made me think that Rapier are up their own arse, dull and misguided as to what they think people would find interesting.

AND it appeared in the Evening Standard, which has a circulation of hundreds of thousands. How many of those could possibly care about choosing a marketing agency (if that’s what Rapier is)? 100? 200? That’s what’s technically known as a Waste Of Money, and I don’t want to give my money to people who have no idea what to do with it.

Last: Squeezy Marmite. It costs more than the stuff in glass jars despite the fact that it’s much lighter, and therefore cheaper to transport. I’d also imagine that a plastic Marmite jar is cheaper to produce. I know Squeezy is better and you usually have to pay more for better, but why not just reflect the cost of the goods? Actually, that’s a really dumb question, and the answer is capitalism.