The Tories (Euro RSCG) have just come up with this brilliant idea: make the leader and chancellor of the opposing party look like Jedward out of X-factor: 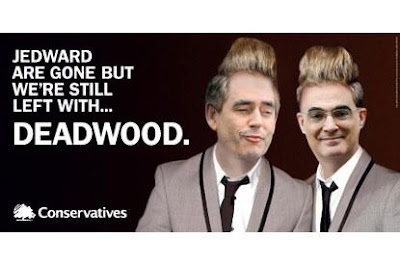 It’s brilliant because they waited a good couple of weeks after the Labour party (Saatchi and Saatchi) made the leader and chancellor of the opposing party look like Jedward out of X-Factor.

I don’t know if they’re going to say that theirs is a response to the Labour version (no one mentions it), but if it is then it’s very weak indeed. They don’t recognise the other one, they just copy it. This poster is not making a comparison between the posters, it’s making a fucking hilarious reference to Jedward being kicked out and yet we’re still left with DEADWOOD (which sounds a bit like Jedward. It does. Go on – try saying them one after the other. See? Genius).

It makes the Tories look like a bunch of rip-off merchant muppets, it makes Euros look uncreative and extremely lazy and it makes Labour look like such brilliant thinkers and trendsetters that their ads are worth copying almost exactly.

Was that really the result they were looking for?