Advertisers not popular with men. Or indeed women. 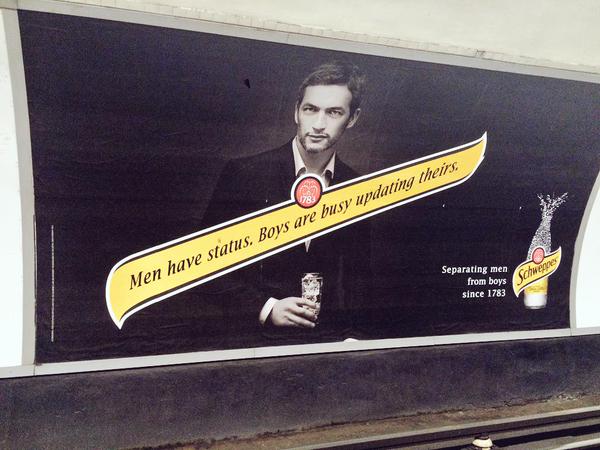 ‘Men have status. Boys are busy updating theirs’?

1.3bn people use Facebook. Is Schweppes really suggesting that it’s more mature not be one of the, say, 500m ‘boys’ who update their statuses? It’s not as if it’s 2007 and Facebook is a niche thing used by little kids. EVERYONE is on Facebook; that means a lot people update their status at some point or another; that means lots of ‘men’ are among those people (including Lee Goulding, who is by far the most manly fella I know).

I’d also question calling out ‘status’ as something to aspire to, like it’s 1987 and we’re all clamouring to be Gordon Gekko. Even if we can get past the outdated bling-craving that feels so 2005, I don’t think 35p worth of tonic water is the best way to denote status, at least not when there’s a Nebuchadnezzar of Cristal to be had.

And it’s fucking Schweppes. Here’s some news for the Dr. Pepper Snapple group who own the esteemed drinks mixer brand: a G’n’T ain’t the most masculine of drinks. I’m a big fan, but it doesn’t separate me from the boys like a straight shot of rye or a pint of bitter might.

One last thing: the model looks like an utter bell.

But it’s not just the guys who are getting it in the neck. Here’s another poster causing controversy on the Tube: 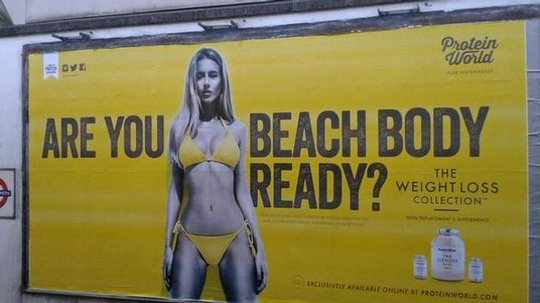 So far over 55,000 people have signed a petition asking for its removal on the grounds that…

‘Perhaps not everyone’s priority is having a ‘beach body’ (by the way, what is that?), and making somebody feel guilty for not prioritising it by questioning their personal choices is a step too far. A body’s function is far more intricate and important than looking ‘beach ready’, so in fact it is Protein World who have confused their priorities, if anyone.’

And many women have been taking their distaste into their own hands: 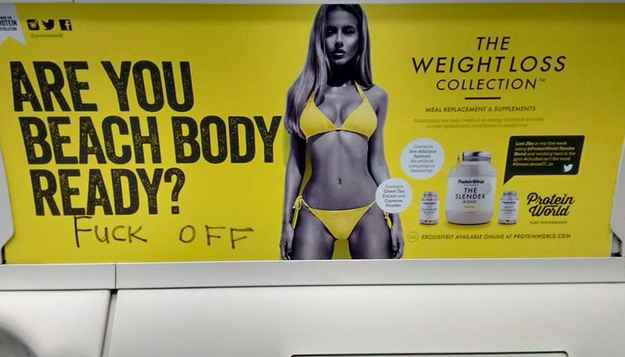 Personally, I don’t see why this has annoyed people so much more than any other ads that ‘make women feel guilty’ (by the way, only you can make yourself feel guilty. Remember that, kids!). I guess it’s a bit more explicit than the other images of idealised women that have featured in ads for decades, but I think the posters that make women feel unattractive/inadequate in a subtler way are more dangerous because there is no open dialogue about the damage they do: 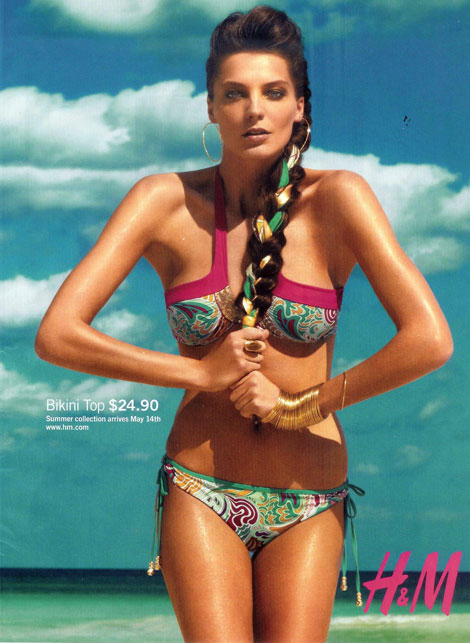 I also think that all this furore will have put Protein World’s Weight Loss collection at the top of any insecure girl’s shopping list. ‘Women’ (whatever that actually means) can object all they want, but this anger isn’t going to undo hundreds of years of aesthetic fascism, and the ladies who are still under its powerful thumb will still want to be ‘Beach Body Ready’.

So, two good reasons why I’m delighted not to be in London right now.

And good luck with that General Election, everyone! From where I’m standing it doesn’t look anything like a giant fucking mess!

15 Responses to Advertisers not popular with men. Or indeed women.