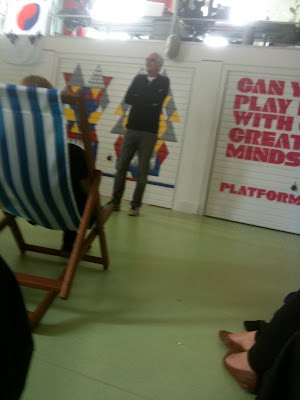 I’m currently freelancing at Wieden and Kennedy in London.

I’ll write a more complete post about what an enjoyable experience that is at some point in the future, but for now I thought it might be good to tell you about this morning when Dan Wieden came to give a talk to the agency (surreptitiously taken photo above).

The talk consisted of plans for the future and praise for the London branch of the network, which he said came up often as the most creative office in W&K.

Whatever his plans are, and those of his worldwide MDs and ECDs (John Jay, Worldwide ECD, was also there), I left with the impression that he knew it would take a great deal of effort to get to where his next vision wants to go, but that he will definitely get there.