I know it’s a cliche to say that people ought to have better things to do than complain about ads (Hello?  The country is going to hell in a financial handcart, and if you don’t care about that, 3000 people are getting killed in the Congo every day) but the latest round of ASA rulings is a delight.

First up, we have this rather amusing ad for Tiger beer from CHI: 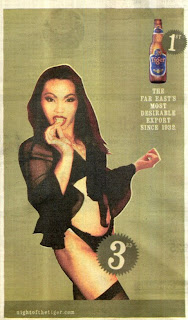 Anyway that only got 8 complaints, so it’s a mere sideshow to the 94 complaints the ASA received that Stella misleadingly implied that they had used maize as a brewing agent since 1366.

Stella implied WHAT? Oh my good God! They didn’t, did they? Really? They implied that they’d been using maize as a brewing agent since 1366 when it wasn’t the case?

(Frankly, I couldn’t give a toss if they’d used baby’s blood to make their delicious, marital violence-inducing beverage.  I suspect the hand of another brewing company, an all-staff ‘could you please complain to the ASA about Stella’ email, and another mockery of the complaints system.)

What Type of Food is Suggested after Gallbladder Surgery? visit what can you eat after gallbladder surgery for more information.